On Climate Change, the South Has a Democratic Party Problem 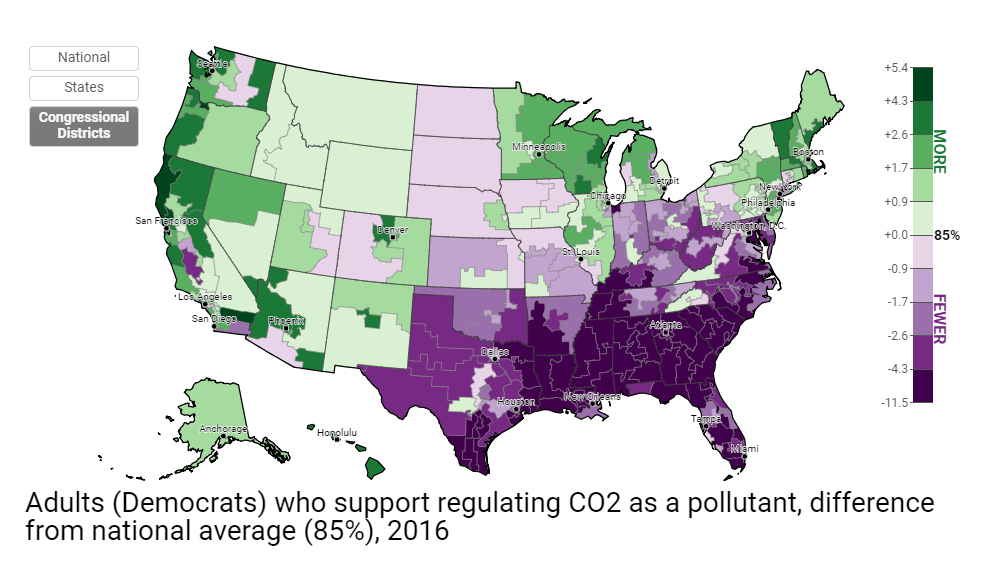 The U.S. South is a complex and often misunderstood region of the country. Though election maps show regions of the nation as either red or blue—most often at the state level—a deeper look reveals a mix of political values (Figure 1). 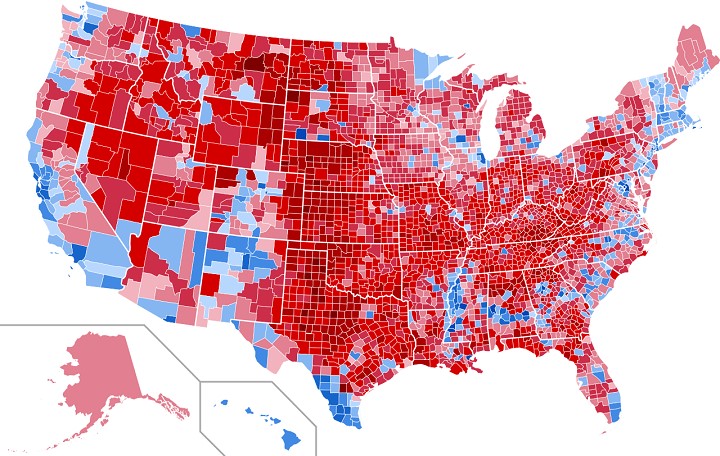 Persistent, but sometimes relatively slight, majorities are what make regions “reliably” red or blue (or at least “reliably” one color or another in the context of state electoral votes in presidential elections). Even in the reliably red South, urban areas tend to be blue while rural areas tend to be red. The degree of blue or red in the region is affected by a complex suite of cultural factors like race, religion, the urban-rural divide, among others. In the state of Alabama, for example, a swath of blue sweeps across the state in counties with large African American populations.

Drawing stark conclusions about a region’s policy preferences based upon its status as red or blue is risky, of course, and can result in oversimplification of the true state of affairs. Variations within blue and red voter blocks also manifest on important issues of policy, due also to often-overlooked cultural and socio-political factors. Such is the case on the issue of climate change. Southern governments are particularly reticent to enact climate-related policies, and denial of basic climate science is particularly acute in the region—with both major political parties playing a role. This denial is notwithstanding the fact that, according to a recent report in Science, southern states will suffer a disproportionate share of the economic damage caused by climate change (Figure 2). 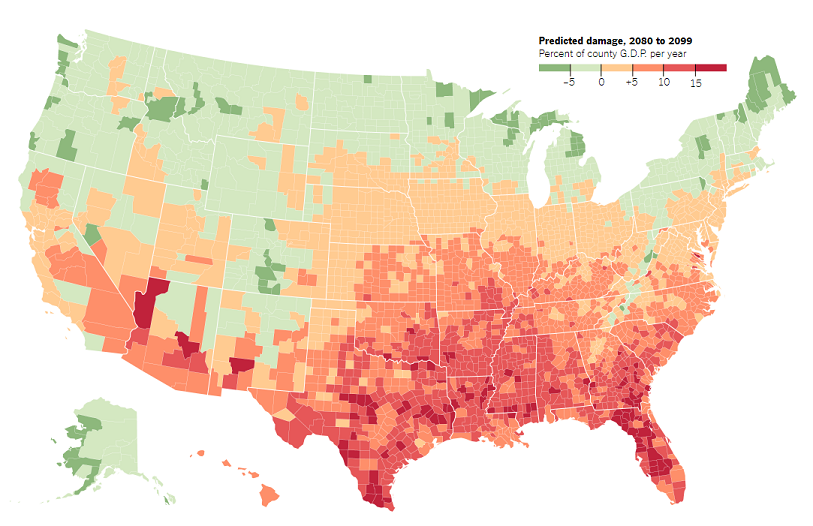 Southern Democrats are another story, however. On each of these questions, Democrats in the South are anywhere from 6-22% less likely than Democrats in other parts of the nation to believe global warming is happening, to believe that it is mostly caused by human activities, to trust the scientific consensus on climate change, and to be worried about climate change. In fact, while Republicans in the South (at least in states east of the Mississippi River) are more likely to support regulating CO2 as a pollutant than Republicans in the Midwest and West (Figure 4), Democrats are up to 12% less likely than Democrats in virtually all other regions of the country to support CO2 regulation (Figure 5).

There are a number of potential explanations for the disparity between southern Democratic Party member views and national party views on climate. Perhaps registrants include “yellow dog Democrats” holding over from a time when the party’s platform more closely resembled aspects of the modern Republican Party—that is, a more conservative Democratic Party member. Perhaps education plays a role, since by some metrics 10 of the 12 least educated states are southern (and only 1 southern state, Virginia, cracks the top 25 most educated states). Religion may play a role, as evangelicals make up a large part of the southern voter block—within both parties—and are overall less inclined to accept the science and significance of climate change.

Regardless of the unique cultural and sociopolitical factors driving southern Democratic Party members’ lagging views on climate, it is an issue that needs to be addressed if meaningful climate action (at the federal or state levels) is to come about anytime soon. Because if Republicans in the South hold par for the course with other Republicans nationally in their views on climate, and Democrats in the South are more antagonistic toward climate science and policy than Democrats in other regions of the country, the South will remain mired in climate denial for the foreseeable future. Though there are voters supporting climate action in the South, their policy preferences are constrained because both state legislatures in the South, as well as federal representatives sent to Congress from those states, are disinclined to take action—a problem contributed to by voters from both parties. Voters who, at the least, do not value action on climate change, and, at the most, outright deny the existence of—or human role in—climate change, simply outweigh climate action voters in state-level and national elections.

Ultimately, religion, political philosophy (distinct from “party affiliation”), race, and other cultural attributes of southerners heavily influence how they interpret and process information regarding climate change, the level of trust they maintain in the sources of that information, and their willingness to take action based upon it. Currently, that mix of attributes tends toward a majority of southerners not having an interest in proactive climate policy, thus denying the disaster that is already befalling them. Those seeking to change the game on climate perspectives in the South will need to better understand and develop more effective mechanisms accounting for the unique attributes of southern culture and politics if a change in course is to occur.

It is particularly unfortunate (and ironic) that climate denial is so entrenched in the South, considering that the southern U.S. is projected to experience the most economic and physical harm due to climate change, becoming even more economically depressed and its people harmed in very direct ways—such as through the loss of property, forced migration, and even loss of life. Such a large region of the United States taking a position so contrary to science—and more importantly so contrary to its own self-interest—is a tragedy in and of itself.

There is much work to do to address climate science and policy apathy. But contrary to conventional narratives, that work must be done within both parties, and in particular the southern strain of the Democratic Party. Only by recognizing the nuance and complexity of the politics surrounding climate change can we understand and craft more effective approaches to forging climate action.

One Comment on “On Climate Change, the South Has a Democratic Party Problem”